This academic year, Britannica International School celebrates its 7th Year of Excellence in delivering the Best of British Education to Shanghai’s parents and children.

After opening in August 2013, the school has subsequently grown 7-fold and has firmly established itself as one of the premier international schools on offer to Shanghai’s discerning parents.

With examination results at IGCSE and A Level on a par with the best achieved in the city and that rival top UK schools back home, Britannica has built up credentials that give parents confidence in the quality of education delivered.

Even after seven years, Britannica still remains the only truly British owned and managed International School in Shanghai. Owned by Orbital Education, a Manchester UK based educational group, that has won top international awards for its contribution to global education and more recently the Queen’s Award for Enterprise, the school is supported and directed by experienced UK educationalists. Within the school itself, its Principal, Mr David Goodwin, has now been leading the school for over six years and is ably supported by a fully British school leadership team.

A particular strength that has enabled the school to deliver on its promise of Best of British, is the strength and expertise of its teaching staff, which consistently come out as a key strength of the school in parent surveys. Somewhat unusually for a British School, over 85% of its foreign teachers are UK nationals, all fully trained and experienced in delivering the Best of British education. The school guarantees quality staff, who are fully qualified and experienced from Pre-Nursery to Year 13 in their individual areas of expertise.

As the school has grown and developed, so have its unique selling points that distinguish Britannica from its British curriculum competitors in the city.

Britannica now offers one of the most diverse native language programmes available in the city, with native language lessons currently being taught in Mandarin, Korean, Japanese, French, Spanish, Italian and Hebrew. In addition, it promises native Mandarin learners substantial curriculum time compared to what is available to students elsewhere in an international setting.

Being a relatively small school compared to many in Shanghai, a key strength is the school’s ability to be fully inclusive, and as the school has developed Britannica has made the most of this opportunity. Every term, all children are given the opportunity to be on stage performing for an audience and their parents or participating in one of the many school sports squads and a fully inclusive after school activity programme means all students from Reception to Year 13 can be involved in free after school activities on four nights a week.

Parents living in Former French Concession, Jing’an, Zhongshan Park and the Gubei area are particularly attracted to the school because of its excellent location and short travelling times for their child.

Stability, quality and responsiveness are the reassurances that all parents have after registering their child at Britannica. These, combined with the knowledge that everyone at the school understands what a quality British Education means and are committed to its delivery, ensures that both parents and students remain happy and that this is a school in which good teachers want to work.

The school now looks ahead with excitement to the next 7 years, as current students work towards entry into top UK and USA universities and Britannica’s reputation as an international school of excellence reaches beyond the shores of its host country. 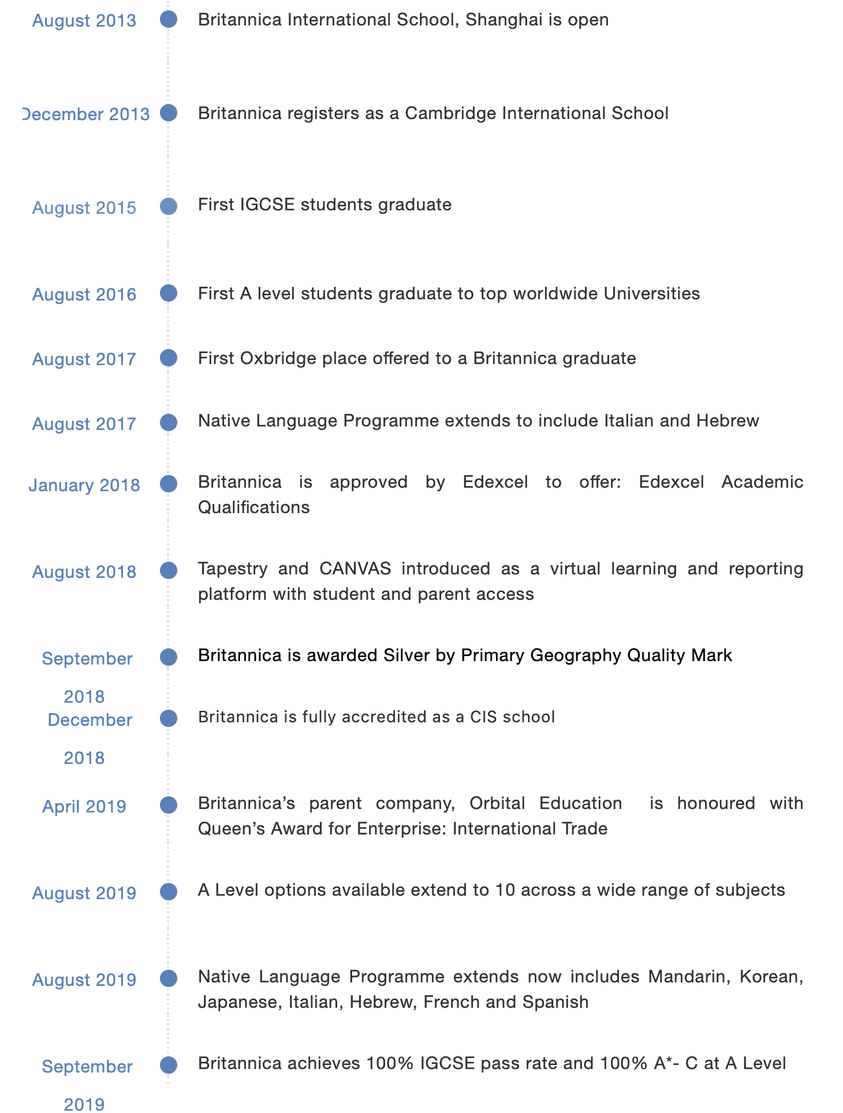